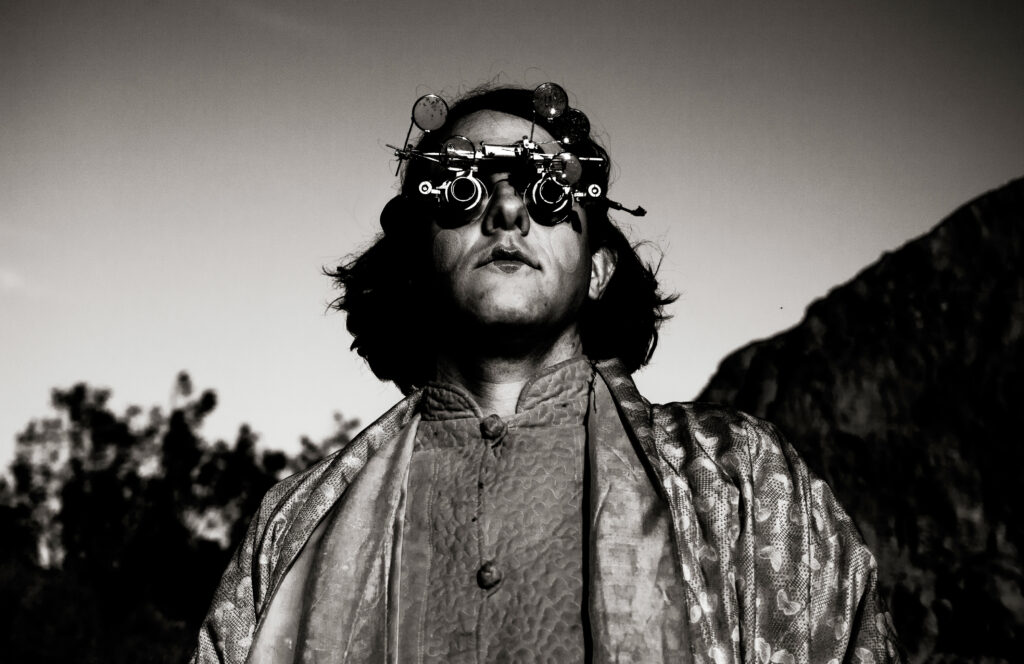 “Harry Cloud runs the gamut from sludgy black metal to creepy electronica to ‘70s good-timey Bay City Rollers sounds. There is little or no way to pigeon hole this one, and, in large part, that’s what makes this work.” – Razorcake

“… all Harry Cloud factors, the strangeness, the eerie sounds, the haunting riffs, the beautiful melodies, the wondering of what is next.” –  Sludgeworld

JUNE 7, 2022 (Los Angeles, CA) — “To me it sounds like broken funk music,” says alternative avant garde artist HARRY CLOUD about his new EP You’ll Never Fix This which comes out today on June 7, 2022via Kitten Robot Records. Off-kilter and often a bit odd, his unique combination of sludge, stoner metal, indie rock and shoegaze rock filled with brilliant riffs careen from the ether into majestic swells and sometimes bizarre but brilliant passages… but for Harry Cloud, that’s par for the course. Accompanied with a fascinatingly and profoundly unique video vision for his music, this multi-media artist’s visual and musical output carries a provocative experience.

Teaming up with one of LA’s finest rock producers Paul Roessler (The Screamers, Josie Cotton, Richie Ramone), Cloud concocts a fascinatingly obtuse and auditorily surreal listening experience. Having been an underground hero for those who love mystery in their music, Cloud has been described as “sounding like you’ve been tethered to a quad bike and dragged full speed, over broken electrical equipment and through a successive series of Kraftwerk, Atari Teenage Riot, A.C. and Sigur Rós shows” by The Burning Beard and “stately artistic sludge bordering on insanity and avant-garde dadaistic drone that drags you into their own colorful tar pit and smothers you with their bizarre mushroomed psychedelic” by The Stone Hive. Unpredictable and oblique, You’ll Never Fix This follows that lead, thrusting you into a realm of shifting rhythms, impossibly catchy off-kilter melodies, and full-throated vocals that can transform – sometimes within the same second – from a whisper to a scream.

An introductory compilation of sorts that is accompanied by equally intriguing videos that hearken Lynch, Tarantino and the early Peter Jackson (with some Troma thrown in for good measure), You’ll Never Fix This is a teaser for his upcoming full-length planned for later this year.  Kicking off with the sludgy “Ferryman’s Guild” that injects subtle synths amidst a sea of distorted guitars and guttural vocals, it’s a “really unusual song,” as he explains. “Paul [Roessler] put a lot of crazy noises throughout the song and I really like my singing. My friend Ryan Weiner played the guitar solo in the middle and I think it’s amazing. The song isn’t really about anything, as some of my songs aren’t. It’s made up words and things that just sounded cool and worked well together phonetically.” Lifted from his 2015 album Harry Cloud’s After School Special, “Away” is a glimpse of his past material to offer historical context that recalls Pixies-esque basslines, an epic and searing guitar, and vocals that soar. “I’ve always liked this song,” he says. “It’s an example of one of the few songs of mine that really takes a catchy traditional pop approach. The chorus is cheesy and clever. The verses were taken from letters my ex-girlfriend had written me.”

While “You’ll Never Fix This” isn’t one of Cloud’s favorite songs amongst his repertoire that he describes as “a long repetitive droning bleak song,” he champions the video as “an incredible video that no one saw. I wrote this song when I was distraught about a woman who was not returning my affections. I had a thought that I am fucked up beyond repair and no woman is going to ever want to be with me. Pretty pitiful, but that is what inspired that song.”  Rounding out the EP is his take on the classic traditional “Happy Birthday.”  Starting off innocently enough with the signature tune sung against a child’s xylophone, the song erupts into a caterwaul of distorted guitar, sinister bass and returns to the signature tune, sing/shouted for good measure. “It was just a funny idea that I had about instead of saying the person’s name in the song it would be just be a bunch of noise and screaming,” he laughs. “In the music video I chainsaw myself to death during the noise section.”

Hailing from Midland, Georgia on the border of Alabama, Harry Cloud’s first foray into music began in the MySpace years when he befriended a group of likeminded artists and moved upstate to Atlanta to join the experimental/noise scene under the name A Butterfly-Eaten Horsehead and later Single Mothers. Migrating out West to Los Angeles afforded a meeting with Paul Roessler who helped him hone his sound with tighter production values at Kitten Robot studios where he recorded 16 albums and EPs so far under Harry Cloud, Fannyland, Orphan Goggles, COPS and Harry Cloud/Paul Roessler.

Now officially signed to Josie Cotton’s Kitten Robot Records, Harry Cloud plans to unleash a whole new era of wildly experimental music. “My hopes for this release is to reach more people than I am normally able to before I had a label and PR supporting me,” he concludes. “My music and videos have always been met with praise and I always thought that more people would enjoy my art if they only knew I existed.”